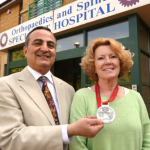 Mum gets back to running after surgery

A woman who suffered debilitating back spasms which made her life a misery has completed a marathon recovery by going the extra mile for charity.

Margo Cox (55) from Orton Longueville was left in agony after suffering back issues since she was a teenager. But after receiving surgery she made the decision to compete in the London Marathon.

Margo said “I had tried everything I could to help, I had traction in hospital, acupuncture, pain killing injections and many other types of medication, but in the end I found the quality of life with such pain was affecting my daily life and so I opted to have surgery”.

Margo had surgery at the Orthopaedics and Spine Specialist Hospital in Bretton six years ago and has since made a full recovery.

Margo said “after surgery I  spent some time off work and within three months I felt totally pain free and I had a new lease of life”.

“I completed the marathon in six hours and forty minutes and my family were there to cheer me on”.

Margo told Mr Shair that “at the end of the race she had pain everywhere except from her back”!

Margo ran the marathon in aid of the London Centre for Children with Cerebral Palsy.